White House is the legend; it has a longer legacy and moves more sandwiches. But Sugar Hill has a 30-year presence, and it's cheaper.

"Everybody compares us to the White House," said Gerry Delany, who owns Sugar Hill Subs with his wife, Denise. "We've tried them. My secret to success is quality, quantity and price. Not putting them down. When people come in and say, 'You're better than the White House,' I say, 'The only difference that the White House has over me is that over there, you're going to pay $2 more a sub with half the meat."

At least in terms of price, his numbers are close; Italian, turkey and cheesesteak subs at Sugar Hill cost about $2.50 less than at White House.

"The recession has helped me be busier because people want treat themselves," Delany said. "You go out to restaurants. Well, they're $60-$70 a pop. You know how many people I can feed for $60? You, your girlfriend, she has a couple nieces and nephews. There's six we're talking right there."

Delany "is easily the second largest consumer of submarine sandwich rolls, I would say, next to the White House," Formica said.

Delany said he was kicked out of his home at age 15. He took a job as a fish gutter at the now-defunct Pantry Pride, where he became familiar with the deli. When he was 22, he moved to Mays Landing and began working at what is now Sugar Hill Subs, and after three years, he bought the restaurant and began working on the perfect sub, he said.

Delany said he refuses to use preservatives. His back fridge is stocked with meats that he will turn over in three days. He spends extra to use Hellmann's mayonnaise and Miracle Whip for his salads. He shows off the refrigerator with great pride. "It's like opening your mother's refrigerator," he said.

Formica explained that Delany's pride - and stubbornness - are what make his food so good.

"He works it like I do," Formica said. "Gerry is very demanding."

"The reason his subs are so good, and the reason his restaurant's good: Nobody's a bigger pain about quality than he is," Formica said. "You know what? That gets my attention. We pride ourselves in treating our customers equal, but he's a little more demanding of not only his bread, but his meat, his produce and his help."

Sugar Hill has a country vibe. It has low, wood-paneled ceilings with old signs and antique Americana. It's a deer-checking station. Almost all staff members, including Delany, wear yellow and red tie-dyed shirts. There are indoor tables made of barrels, and plenty of outdoor tables.

Denise Delany handles the details. While Gerry showed off freezers and quality, she was quick to answer questions about stocking, delivery, prices and more. 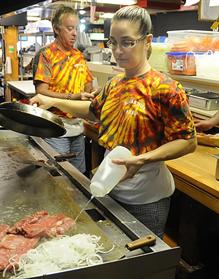 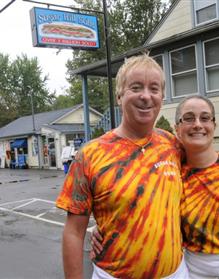 Thank you for contacting us! If needed, you will hear back within 48-72 hours.
View Larger Map

Our dining is on a first come, first served basis. However, if you have a large party, are planning an event, or need catering services, drop us a line and we'll hook you up.

We're located in the heart of old town. Centrally located, you can easily get to us from any area in the valley. Here's a map, but if you get lost, just give us a call and we'll tell you how to get here.